The speedy, high-tech Littoral Combat Ship has been plagued with delays, mechanical problems and cost overruns.

Congress is getting ready to decide the fate of a Navy warship that was heralded as a major high-tech advancement when it was introduced, but has failed to fully live up to its promise.

The Littoral Combat Ship is designed to operate near shorelines. It is fast, traveling at more than 40 knots. It uses a propulsion system similar to a jet ski rather than a traditional rudder and propeller, which makes the ship highly maneuverable. And it uses technology in place of a larger crew.

But the ship has proven far more expensive than the Pentagon predicted, and it's had a stormy rollout. In 2016, the ships recorded five breakdowns during deployments. A San Diego crew was left stranded in Singapore while the Navy reworked the program to dump some its loftier ambitions.

"As ships go, it was supposed to be relatively inexpensive," said Steve Ellis, who is with the watchdog group Taxpayers for Common Sense. "The price went up quite a bit, and then also we're getting an inferior product."

San Diego will eventually be home port to at least 12 LCSs. The USS Gabrielle Giffords is the newest Littoral Combat Ship in the Navy's fleet. It came into port in July, after being built in Alabama and commissioned in Texas.

The Giffords' bridge was relatively empty as the ship arrived in San Diego. Cmdr. Shawn Cowan, the ship's executive officer, said other kinds of Navy ships this size would have crews of roughly 300. The Giffords has a crew of 70.

"The destroyer I was on, we had like 19 people up in the pilot house," Cowan said.

But on the Giffords, he explained, "You don't have 19 different opinions. You have two opinions and the captain." 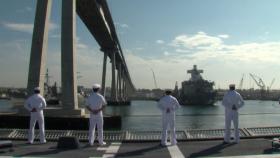 Despite high marks from the Giffords' crew, the LCS program has failed to meet some of its expectations.

The Navy originally hoped to have the LCS swap modules in the field to allow one ship to perform three types of missions: surface warfare, mine detection and anti-submarine warfare.

But that plan was dropped, Some of the components are still years behind schedule, and swapping modules in the field also was not as easy as the Navy originally predicted.

"They tried to make the LCS all things to all people," Ellis said.

The Navy also dumped a special crew configuration developed for the LCS that allowed multiple crews to share a single ship, so the ship could remain deployed longer. The Navy also ended the practice of maintaining separate crews for the different mission modules.

On top of all that, the price tag for the LCSs has doubled. The LCS was expected to cost $220 million per ship when the Navy first testified about the contract in the mid-2000's.

"We are going to start holding people accountable," said McCain during a hearing. "We're talking about millions of dollars here."

In late August, Secretary of the Navy Richard Spencer met with the crew of the Giffords during his first trip to San Diego. He said the Navy is figuring out how to use the new ship.

"We're solving the issues as they come along," Spencer said.

But the problems keep coming. During the Dec. 6 Senate committee hearing, a GAO official questioned whether the LCS can survive an attack. As part of the reboot, the Navy is adding firepower to LCSs set to be deployed overseas. It is testing harpoon missiles for the ships and has said the Giffords will not deploy in 2019 without an upgraded missile system.

Defense Analyst Brian Clark says the LCS was designed in the early 2000's to patrol areas near shore, at a time when coastal waters were often friendlier to U.S. forces. Now the world is more dangerous, and the smaller, lightly armed ship may be more of a target than a deterrent.

"The environment has changed such that you need a ship that can defend itself to a much greater degree than LCS is able to do," he said.

Lessons for the next Navy ship

The General Accounting Office has recommended Congress stop buying new LCS ships until the Navy solves the problems. And the Navy has begun to turn its attention to a different kind of vessel. It's asking for proposals to build a new frigate, a type of ship better suited to dangerous waters than the LCS is.

Even so, LCS supporters in Congress want to include up to three more LCSs in the next budget. They say that would preserve competition among the two shipyards that build the ship, which could ultimately drive down the cost for the new frigate when the Navyis ready to build it.

"They would build the LCS for another two years for the purpose of allowing those two shipyards to compete for the new frigate," said Defense Analyst Brian Clark.

Clark hopes the Pentagon doesn't make the same mistakes with the new vessel that hampered that LCS program. In particular, he said the Navy moved too quickly from design to building. It bet that technology would catch up, but it did not.

"The lesson would be, don't try to accelerate something like ship building," Clark said.