Charlotte-Mecklenburg school board members voted 7-2 Tuesday night to increase support for LGBTQ students by expanding the district’s multiculturalism policy. The vote followed a public hearing on the matter that was heated and, at times, combative.

With the change, CMS’ multiculturalism policy not only defines diversity in terms of race, religion, national origin and gender, it now includes gender identity/expression and sexual orientation. This did not sit well with many people at the meeting. 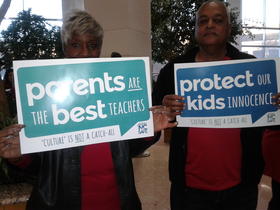 “Making changes to the multiculturalism policy to include language about gender identity and sexual orientation is anti-science, anti-parent and anti-child,” said CMS parent David Evans.

About 25 people spoke against the policy changes. Some accused school board members of forcing their children to accept what they called an LGBTQ lifestyle and undermining parents’ rights to teach them about values and sexuality in the privacy of their homes.

The chamber was packed. Many people carried signs that read “Parents are the best teachers,” "Protect our kids innocence.” Some used biblical references in opposing the policy change.

When Benham’s time was up, he continued talking, causing board chairman Mary McCray to bang her gavel and call for order.

Benham began approaching the dais, even after he was warned by McCray and other board members not to approach them. He was escorted out of the meeting by security guards.

A handful of supporters of the policy spoke at a public hearing earlier this month. They were in the minority at this second hearing.

“Public education is all about diversity and inclusion,” said parent Allen Smith. “So, yeah, it is for the LGBTQ kid who’s afraid to go to class but it’s also for the Latino students who don’t feel welcome at their own prom and you know who else? Students whose parents hold such fundamentalists values that the only place their kids will ever experience an environment free of homophobia and racism is a public school classroom.”

School board members Thelma Byers Bailey and Sean Strain were the only votes cast against the policy change. Strain wanted to know if some parents’ fears that it would result in curriculum changes were warranted. He was told there would be professional development for teachers around LGBTQ protections, but no curriculum changes. He wasn’t convinced.

“The words in this policy state that we are to acknowledge and support multiculturalism by intentionally incorporating diversity throughout the curriculum and instructional development,” Strain said. “So if the answer is no, it’s not curriculum related, I’m a little troubled by the disconnect between the language and the policy.”

Board members who voted for the policy change say they believe it will result in making all students feel safer and more comfortable in schools. School board members have been working on this policy for a year but it was put on hold while they focused on the new student assignment plan.