CMPD has released five body camera videos related to the Sept. 6 shooting of Rueben Galindo. The footage shows he had his arms raised when officer shot him.

Galindo called 911 saying he had a gun with no bullets, and requested police to come. Galindo also requested a Spanish-speaking translator on the 911 call.

A translator was provided, and Galindo references a looming court date. Galindo was facing a misdemeanor assault charge after pointing a gun at someone on April 12th.

But there seems to be some miscommunication throughout the call between the dispatcher, translator, and Galindo.

He’s told to put the gun down during the 911 call, but it’s not clear if he understood the instructions. His response is that the gun has no bullets.

When officers arrived at his North Charlotte residence, they ordered Galindo to put down the gun. Officer David Guerra calls his name, says “manos” (“hands” in Spanish) and then yells for Galindo to drop the gun.

Guerra and officer Courtney Suggs shoot Galindo after he refused to comply.

Seth Stoughton, a professor at the University of South Carolina who studies police tactics, says he can’t draw a conclusion on whether this shooting was lawful, and he can’t make out for sure whether Galindo had a gun. If Galindo was holding a gun, Stoughton says officers could reasonably construe him as a threat even with hands in the air.  But, he says ,the positioning of officers matters.

“When officers are in a tactically advantageous position -- not perfect safety, but behind cover and concealment –  then the threat of having a gun in someone’s hand is mitigated.”

Stoughton says the officers’ tactics appear appropriate in how they approached the residence.  However, he still has a lot of questions.

The clearest footage of the shooting comes from the body camera of an officer who didn’t fire. That officer is behind Guerra on a hill. The footage shows both of Galindo’s arms outstretched over his head, sort of like a V.

You can make out a flashlight from officers on the other side of a building from where Guerra was standing, one of them being officer Suggs. CMPD has released photos that it says show Galindo with a gun in his left hand: 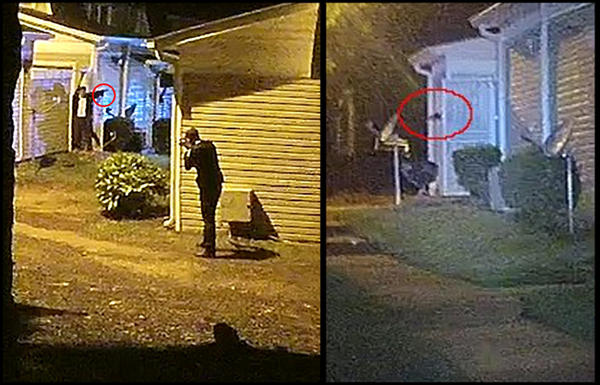 Both Guerra and Suggs are on administrative assignment, pending the outcome of the investigation. That is standard protocol.

Galindo’s family maintains that he was not a threat and this is an unjust shooting, according to Hector Vaca of Action NC, who has been in communication with the family.

Robert Dawkins of Action NC says the video is concerning.

“I hope there is time for people to look at it and draw an opinion," Dawkins said. "Our whole job is for transparency so the public can make their opinion."

A superior court judge ordered the release of the video in response to petitions filed by Dawkins and Charlotte Observer Investigations Editor Doug Miller.