Since 2005, if you purchase a gun in the United States, you’re going to be given a free gun lock. It’s a federal law. But many gun safety experts don’t believe the most popular kind of these locks are effective at keeping people, especially older children, from gaining access.

In Highland Presbyterian Church’s gymnasium in Fayetteville, North Carolina, the local police department and Operation Ceasefire, a gun violence prevention group, are hosting a movie night. There are tables and booths from the local community college and the Wildlife center. There’s a hot dog dinner, an inflatable slide and a K-9 demonstration the police department puts on for the kids.

But the main focus of these events, which have been happening each summer for the past 12 years, is to educate the community about gun violence. In the center of the gymnasium’s floor there is an Operation Ceasefire booth. Volunteers hand out free swag: a cable gun lock. They look similar to a cable lock you’d find on a bicycle and are provided by a group called Project ChildSafe. 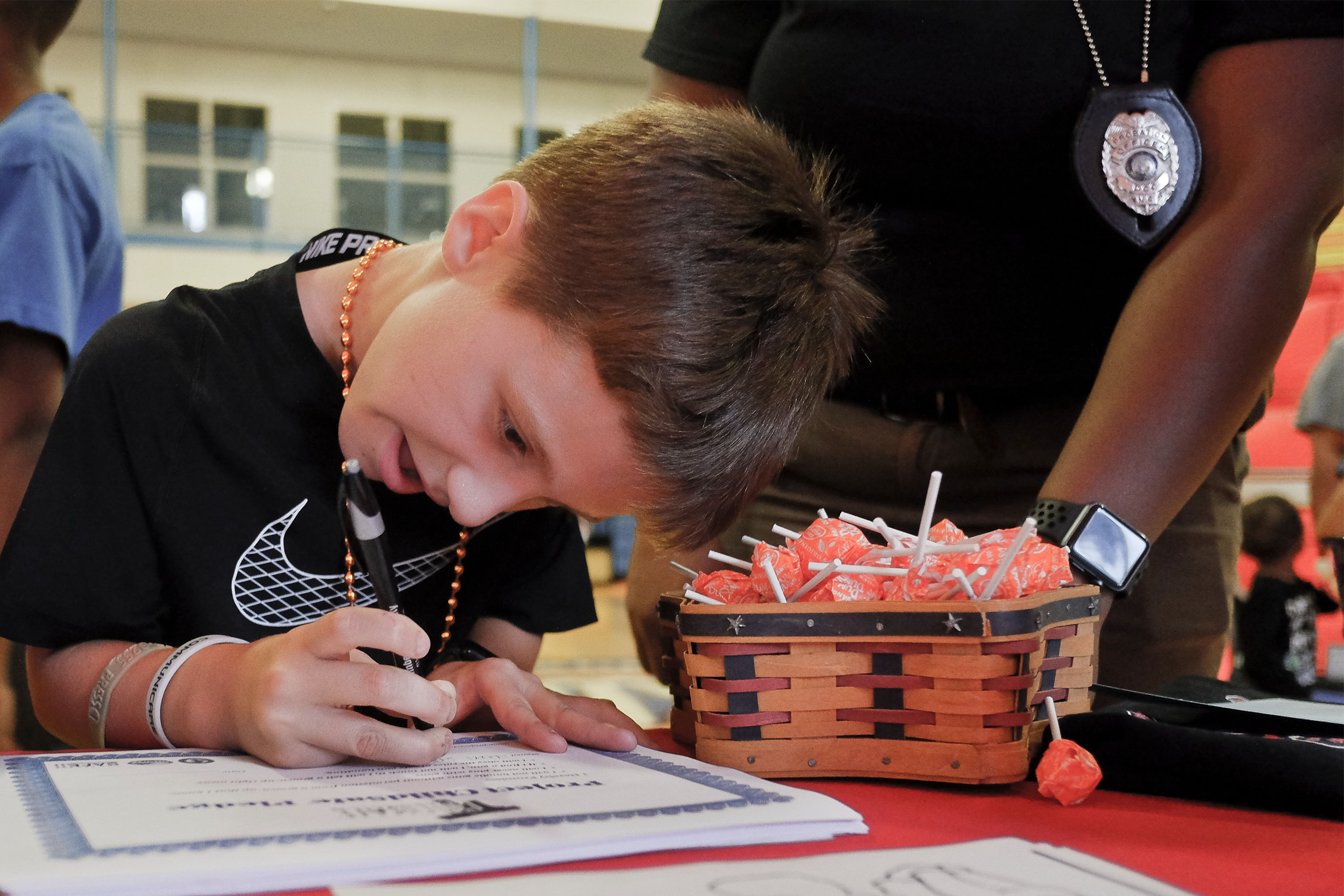 A young boy fills out Project ChildSafe’s Gun Pledge, which asks children to get an adult if they come across an unlocked gun.

This year marks Project ChildSafe’s 20th anniversary. The gun safety education organization is an arm of the National Shooting Sports Foundation (NSSF). The group says it has partnered with 15,000 law enforcement agencies and handed out more than 38 million cable locks.

“Once [the cable lock] is in place, you cannot function the firearm,” said Joe Bartozzi, the current president of the NSSF. “That is, it blocks the mechanism from closing.”

These cable locks have become widely available for gun owners. In 2005, Congress passed legislation requiring licensed importers, manufacturers and dealers to sell or transfer handguns with safe storage devices. Today, most handguns are sold with a cable lock. 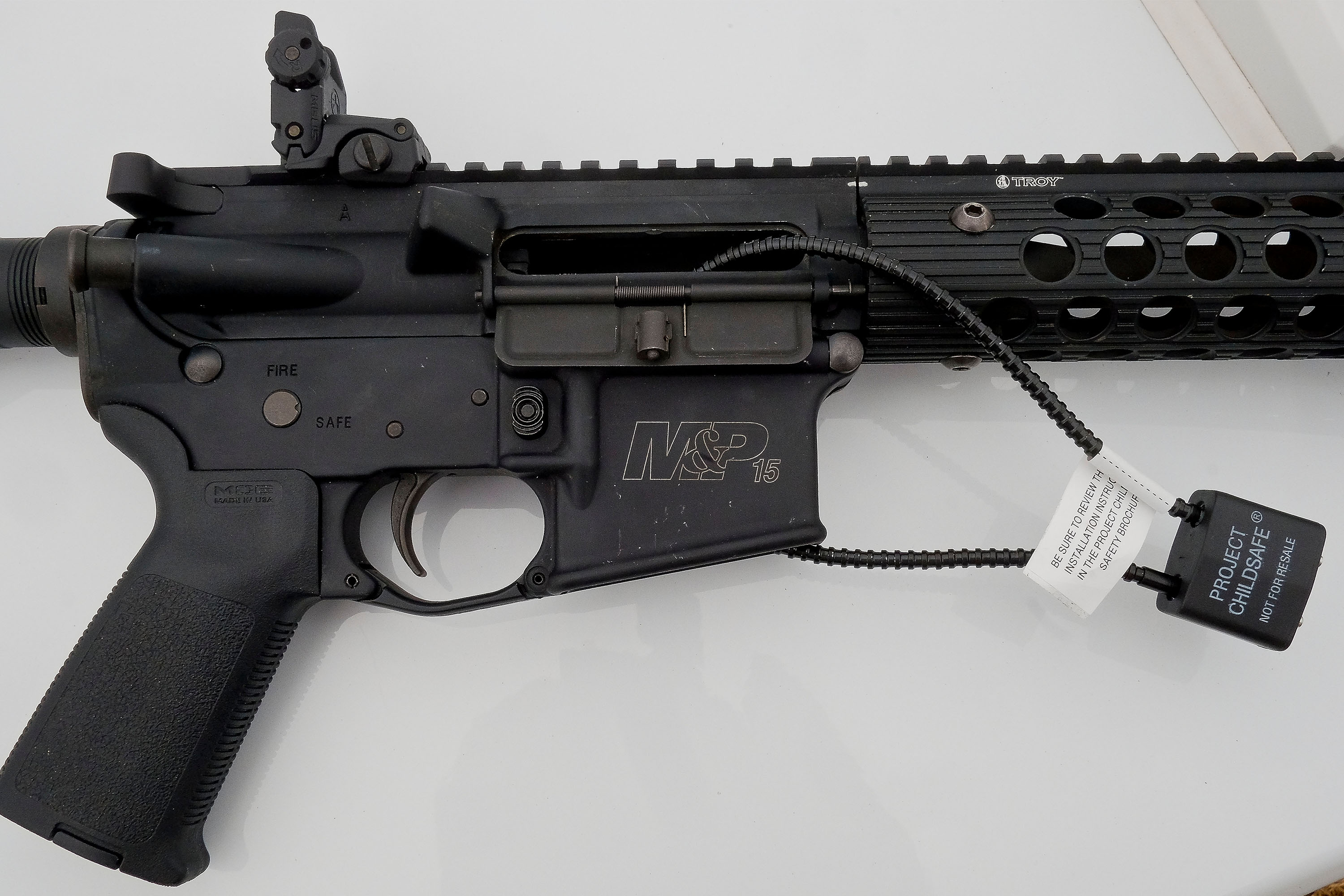 The lock fits down the ejection port and down the magazine well of the gun. Once the lock is in place, the gun can’t be fired.

“You can lock revolvers and semi-automatic pistols and rifles and so forth with this one particular kind of cable lock, because it’s kind of universal,” said Bartozzi.

But here’s the catch: Some people don’t feel that these cable locks are particularly effective.

You Get What You Pay For

Deb Azrael is the Director of Research at the Harvard Injury Control Research Center (HICRC). She says these cable locks could be easily broken into.

“They’re pretty flimsy and even I — and I’m not clever at these sorts of things — can use a screwdriver to open one up, or bang it with a hammer, or cut it with a good set of wire clippers,” said Azrael.

In 2001, the NSSF recalled 400,000 cable locks that could be opened without a key. Soon after, the organization said it would replace the faulty locks with an improved version, with a thicker braided steel cable and a better padlock.

Azrael still feels cable locks are not an adequate locking device for a firearm.

“If a person is set on getting [a gun] that cable lock is no more than a temporary impediment,” Azrael said.

For the most part, there is no universally accepted standard for gun locks. But a few organizations have recommendations.

ASTM International, a standards development organization, has developed voluntary consensus standards for some models of cable locks, but Azrael and her colleague Mary Vriniotis, a research specialist at HICRC, feel the bar is quite low.

“Depending on the device type and the method of attempting to compromise the device, a lock or lock box can pass, if a tester is unable to compromise it in as little as two minutes,” said Vrinoitis.

She says this time limit would not be a deterrent to a teenager living in the same house with the device. She also says these days, most people can figure out how to break into most devices after watching a few videos on YouTube.

How People Store Guns Around Children

If you store your guns in a home with kids, the calculus is a little different. The American Academy of Pediatrics (AAP) recommends keeping firearms locked, unloaded and separate from ammunition.

“If those cable locks are substituting for more definitive and real actions to reduce access to a firearm, then that would be unfortunate,” Azrael said.

Azrael fears that people will get a free Project ChildSafe cable lock, lock up their gun and feel they’ve done everything they need to do to keep that firearm secured. They may not think about it again, even as the child grows older and is better able to gain access to a cable-locked gun.

“By the time those children are teenagers, [parents] are as likely to store a gun loaded and unlocked as people who don’t have any children at all,” Azrael said.

She says parents act this way because they’re often focused on accidental shootings. They picture their toddler finding their unlocked and loaded firearm and want to prevent that from happening. But people forget another major threat: suicide, which accounts for two-thirds of gun deaths.

Having a gun in the home does not make a person feel suicidal, but Azrael says if a teenager is feeling depressed or stressed and also has access to a firearm, an impulse decision could end up being a fatal one.

Both Azrael and Vrinoitis believe cable locks are fine as a short-term solution to quickly lock a gun before a gun safe becomes available.

“What I want is if you go home with a kid who’s having a hard time, taking that gun, unloading it, putting it in a safe, changing the combination and keeping it that way until you’re really certain that kid is OK again,” Azrael said.

Convincing People To Use Locks

But the storage options Azrael recommends are not accessible to everyone. Gun safes with combination locks can range from $57 to more than $1,000. And in that case, a free cable lock is at least something.

There is no federal law requiring people to safely store their firearms. Massachusetts is the only state that requires that all firearms are stored with a lock.

In the absence of a federal mandate, Joe Bartozzi with the NSSF feels his organization has a role to play in advocating for safe storage.

“We can’t make people use the lock, but we can appeal to them as fellow gun owners,” Bartozzi said. “When you’re not using the firearm, the safe and responsible thing to do is to lock it securely.”