When Mitchell Silver was the director of City Planning for Raleigh, the city experienced massive growth. Silver oversaw multiple projects in the area, including the development of the transit hub Raleigh Union Station. Now, Silver has returned to Raleigh as a consultant after serving as the commissioner for New York City’s Department of Parks & Recreation.

Kamaya Truitt, WUNC’s director of New Talent and Community Partnerships, spoke with Silver about Raleigh’s growth in the last decade and the direction he hopes the city trends for more inclusivity.

You have to recognize places are growing and places are shrinking. Each place presents different challenges. Shrinking cities, you know, that's a challenge. And so there are those that are leaving the city and have an option to leave. But in growing places, there's a lot of pressure. They're coming from all over the country. And so you have to recognize that as places grow, you have to create those spaces in places where people can thrive, where people have jobs, where they can prosper. But at the same time, you have to plan for all.

If you want to have a great city, everyone deserves a quality space...If you're going to build a great city, you can’t focus on some at the expense of others, you have to plan for all.

Being inclusive means everyone. And so as areas prosper, there are some, for many, many reasons — whether it's redlining, segregation, discrimination — did not have the ability to have their communities thrive. And so to me, all communities have to prosper, and not just focus on one. And if you want to have a great city, everyone deserves a quality space. They deserve access to resources, they deserve access to transportation.

I do believe in equity, which is fairness. If you're going to build a great city, you can’t focus on some at the expense of others, you have to plan for all. And so I’m a New Yorker. I'm very direct. I speak my heart. And I've been very fortunate both in Raleigh and New York, that people listen because it's not “pie in the sky” thinking. It’s really based in reality. And people acknowledge it may be uncomfortable, but they realize everyone deserves a quality community.

How do you think Raleigh is doing with that, with you being here from before and coming back now?

I'm still assessing what happened. When I was here, I was very concerned about Raleigh being so close to downtown. At that time, I told everyone, we need to think very differently. You're too close to downtown. Because you're close to downtown, there's going to be strong market pressures to revitalize and gentrify east of Raleigh. And so I see that has happened. And when I go back, I remember I had a presentation back in 2006. And I told them, we need to do these things, and if you don't, it will lead toward gentrification. Most of the land is in private hands, not the city's hands. The city is not moving to gentrify this area. It is a private-to-private transaction. Everyone has a price, or taxes are going up so high they can't afford to be there. And little by little, we saw East Raleigh gentrify. That to me is probably the biggest change that I've seen. The other ones are a lot of projects that I had envisioned now came out the ground; Raleigh Union Station, The Warehouse District, conversations about downtown South Hillsborough Street, the Village District, formerly known as Cameron Village. So a lot of those projects I had envisioned, now to see them out the ground is pretty cool.

What makes a park inclusive outside of the folks that are visiting?

To me, a park is inclusive when there's two things: you can say, “I belong here,” and “I feel welcome here.” To me that is the true test. The uses that are in it. There are some places that don't want basketball, which is a clear message like saying we don't want these young urban youth in our park. Places to eat. People of color love to dine, to hang out and eat. Picnic tables, barbecue. But very often I've seen parks that are designed where I don't feel welcome there. I don't play bocce, I don't play some of these sports. Here are the sports that I play. And as you reach out to the community, as you design, you're reflecting the culture and aspirations and the amenities people want.

To me, a park is inclusive when there's two things: you can say, “I belong here,” and “I feel welcome here.” To me that is the true test.

I'll tell you a story. I was in Prospect Park, and I remember, as commissioner, this guy was emailing me saying there are these Mexicans and they're barbecuing in an unsanctioned area. We are not supposed to barbecue. So I said, "Okay, well, I'll look into this." I went to the area. Yeah, there were a lot of people. Barbecuing wasn't allowed. So I came back and I said, “Sir, I'm going to solve the problem as well.” “How are you going to handle it? You're going to put up some signs.” I go, “Yes, I am. I'm now gonna allow barbecuing in that area.” He almost lost his breath. And I went there. These are uncles, grandmothers, fathers, kids. I saw the joy of these people breaking bread and cooking and eating. And now we want them to walk another half mile across the park just so they can go to a place where it was sanctioned? So we made that place legal. And I think that's what is inclusive, all are welcome.

Here's another point that shocked me. When I came to New York City, there was a sign that said you could not loiter in a park. Now I get loitering for public property. But the word loitering means to sit or stand idly by with no apparent purpose. Kamaya, that's what you do in a park. But if you're a nice white couple sitting on a park bench, “Oh look at them enjoying our park.” But there are five black and brown teenagers, you're loitering. Let's get them out of here. So we removed loitering as a rule on our side, because parks are welcome to all.

What always bothered me is that people look at a neighborhood and say like, "Oh, look at that neighborhood, you know, ghetto, whatever they call it." I don't think they understand how some of them were created. You know, people were basically bound in these areas and couldn't move. And if you read the language in North Carolina urban real estate statutes, I just presented that this morning, it was hard to read. I mean, really hard to read about how they said if an area gets this blighted, we have the power to take it and redevelop it. But my whole question is, "Well, how did it get that way?" That is very troubling to read, but it shows you the evolution over time, you know, cities, towns are layers of history. And if you build upon it generation after generation, now if we truly believe in equity, diversity and inclusion, it's up to us to pass some of those right and wrongs. I'm not calling it reparations. You can call whatever you want. But we have to deal with this because it was not fair, that one generation was pressed and held back, while another one accumulated wealth and then point to the victim as if this was your fault. It's not fair.

So I will continue to lend my voice as I speak to highlight these issues. I bring people real examples...And as a consultant, even when I was a consultant years ago, I used to go to a neighborhood like a detective. And look at these clues to find out what happened and why. And then find out if that municipality is willing to go back and rectify some of these things. 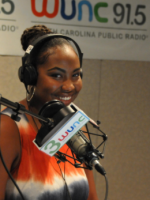 Charlie Shelton-Ormond
Charlie Shelton-Ormond is a podcast producer for WUNC.
See stories by Charlie Shelton-Ormond
LATEST STORIES
Elections 2022
Follow WUNC's politics team for the latest news and information about redistricting, voting, and the 2022 election.
READ MORE
Applications for the 2022 Youth Reporting Institute are now open!
Apply Now
Pauli the Podcast
North Carolina Public Radio presents Pauli, a podcast about the power of one person to change what's possible for us all.
LISTEN
Discuss North Carolina politics. Analyze how and why you love the way you do. Quiz yourself on Black history. Hear poetry from NC's poet laureate. Meet NPR hosts and reporters. You never know where WUNC's events will take you. Join us for this ride! See our upcoming events and sign up to attend.
SEE OUR EVENTS
Stories From This Author