Three Decades of Pop Music, Colliding at Once

On Under the Influence of Giants' "In the Clouds," Michael Jackson meets Prince meets The Bee Gees meets a significant chunk of the Billboard charts over the course of the last three decades. Students of pop culture and funky dance music, the band's members have created a quintessential summer soundtrack. Their colorful, crowd-pleasing sound seems made to serve as a backdrop for flirting across crowded rooms, wading through dance floors and rubbing up against an army of sweaty party people.

"In the Clouds" practically bursts with infectious energy, spilling over with disco beats and Vocoder-enhanced backing vocals, while singer Aaron Bruno unleashes a mean falsetto, evoking a younger and hipper Barry Gibb. The result is a fun, sexy anthem that shimmies with a cool confidence. Accessible enough for pop radio and savvy enough to span multiple eras of popular music, Under the Influence of Giants crafts a heady cocktail of soulful rock, slick party-pop and sly R&B. It's likely to get ubiquitous in a hurry, and it deserves the inevitable overexposure.

Listen to yesterday's 'Song of the Day.' 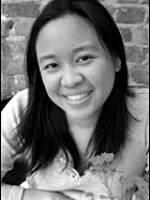 Kathryn Yu
By day, Kathryn Yu is an Interaction Designer working for a marketing firm in New York City, toiling away at Web sites. By night, she's a freelance photographer and live-music addict. Her photography has appeared in publications like Pitchfork, Rollingstone.com, Thrillist, Gothamist, and more. She often forgets to blog at kathrynyu.com, and is also making a movie.
LATEST STORIES
Discuss North Carolina politics. Analyze how and why you love the way you do. Quiz yourself on Black history. Hear poetry from NC's poet laureate. Meet NPR hosts and reporters. You never know where WUNC's events will take you. Join us for this ride! See our upcoming events and sign up to attend.
SEE OUR EVENTS
More Stories