The Mansion Restaurant in Manhattan is closing for renovations in a few weeks. It's an old-fashioned diner... a neighborhood mainstay just a few blocks from Gracie Mansion, the mayor's official residence. The Mansion has been in business for half a century.

Owner Phil Phillips says his father openend the diner in 1945, and some of the equipment "dates back five decades."

Yorkville, where the diner sits, used to be a blue-collar community of European immigrants. The area's gone upscale since then, but the diner hasn't really kept pace.

So Phillips is investing $750,000 in an overhaul, ripping out paneling and exposing brick walls. His family is from Cypress, and he has hired Greek and Italian architects for the renovation.

Phillips is used to holding court with tourists, and the occasional mayor. He regales them with stories, like the one about the customer who died of a heart attack in one of the booths.

"My customers never lost a beat," Phillips recalls. "'More cole-slaw,' 'can I have more sweet and low,' 'can I have a check.' And one woman even stepped over the body on her way out the door as if nothing was there."

He takes the same jovial tone with the architects, making sure each of them sees the sign outside: 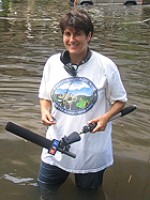 Anne Hawke
Anne Hawke traveled throughout the United States and across the globe to produce and report stories for NPR's National Desk, and now travels to NPR, often in the middle of the night, to edit Morning Edition.
LATEST STORIES
Discuss North Carolina politics. Analyze how and why you love the way you do. Quiz yourself on Black history. Hear poetry from NC's poet laureate. Meet NPR hosts and reporters. You never know where WUNC's events will take you. Join us for this ride! See our upcoming events and sign up to attend.
SEE OUR EVENTS
Stories From This Author